“One day the world will grow green with our Love.” – Rumi 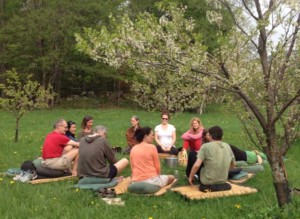 We are expanding our practice of Yoga and the practice of environmental stewardship by planting fruit trees around the planet.

The Green Yoga Seva Groves will offer a place where communities can gather to practice asana, meditation, cultivate and care for the trees, and share the harvest. They will do their part to lower carbon in the atmosphere and will educate the communities about sustainable agriculture.

As you know, the Green Yoga Association is a global community of yogis deeply connected to the practice of Yoga and the practice of environmental stewardship. Fruit trees will be planted around the globe, so that communities can gather to practice asana, meditation, cultivate and care for the trees, and share the harvest.

This tree-planting project expands knowledge of permaculture practices that, in turn, feed our Yoga. And as we practice in the beauty of the fruit tree groves, we embody the Yoga practices that nourish our ecological action in the world. The Green Yoga Seva Groves are real life manifestations of our practice.

A Story of Purple in the Grove

Amy Kaplan, Metta Earth Intern Summer 2009.
Before commencing work here, in the gardens of Metta Earth one always begins first with an “attunement.” During this time, one sits in the garden’s center and absorbs with all senses the energies of the garden and partakes in a moment of appreciation, setting an intention for the day’s duties that lay ahead. On the day I first noticed them, I sat with my eyes closed, my face taking in the sunlight that had blessed me with its presence for the first time in weeks. I heard the breeze pass through leaves of surrounding trees and the bees fulfilling their own duties, pollinating the garden’s various offerings of sweet nectar.

I could also hear the chickens, performing their rituals. I could catch a whiff here and there of their smell in the wind, mingled with herbs and flowers and fruits. I could almost taste the strawberries that were ripening just a few feet away, but the one thing in the garden that struck me most on this particular day were the itty-bitty seeds of the Johnny Jump-ups, right there in front of me in the very center of the garden. I had never noticed them before. There they were, hidden among the many purples of the small flowers, presenting themselves in tiny jester-hat-shaped explosions, several small three-pointed stars, stuffed with tiny little spheres.  It is not everyday one is introduced to such precious bank of seeds and I wanted to collect them and save them to plant. As I continued in my silent mediation, I became inspired. With all of the different shades of purples, with hints of yellow and red and peach and white, jumping up in the center of the garden I thought “The purples of these Johnny Jump-Ups would accentuate the delicious purple plums of the grove beautifully. How perfect these seeds would be planted in the center of the plum grove!”

A few days later, I asked Gillian if I could plant the Johnny Jump-Ups using the seeds that I had been excitedly dwelling upon. At first, she spoke of a sand and rock garden in the grove’s center, but I insisted on the seeds I had discovered. I really wanted the purple flowers. After slight hesitation, she agreed to support my desires. I ran outside, collected the seeds from the center garden and carried them to the center of the plum grove, which had been marked in the exact center with a bowl of water with a crystal in it. I wanted to keep the crystal in the bowl of water at the very center and decided I would just excavate a small circle around the bowl to plant the Johnny Jump-Ups. I moved the bowl, which was covering a hole where the center was previously marked with a stick. I wanted to be sure that the alter would remain in the very center, so I began to dig around the hole, removing the sod. I only dug down 4 or 5 inches or so and determined that the center circle would be only about 2 feet wide all the way around. As I dug I pulled out rocks and started to outline the circumference. After only a few fork-fulls of dirt and grass, I noticed something strange in the dirt. It appeared to be plastic. I brushed it off to discover that it was not an ordinary piece of trash that had been accidently buried, but the stem of plastic flowers…and what was more…purple flowers! With only another scoop or so I found the rest of the false plant- small purple flowers. I couldn’t fathom it. I knew that Gillian and Russell would never plant plastic anything in their garden, let alone fake flowers…and the grove hadn’t been there long enough to have been marked at the center with something that would end up buried below the grassy surface. As I finished digging the circle, I dug up something else – a plastic horseshoe. Some previous owner, years ago, must have buried an old farm horse exactly where I had been digging. I couldn’t believe it. How incredibly bizarre that right there, in the very center of the circle of these seven planted plum trees, somebody had buried an old friend, and what’s more marked the grave with a memorial of purple flowers!

Baffled, I brought my findings inside to show Gillian and Russell and to confirm that they had no prior knowledge of the flowers and horseshoe, which as I anticipated, they did not. They mentioned that the previous property owners before them were older folk who had no livestock. We cannot be sure which owner previous to them may have owned the deceased horse. Whoever it was that had mourned the loss of their horse companion years ago could have just marked the spot with a painted stone or plain old rock. They could have planted real flowers. They also could have planted white flowers or pink flowers or yellow flowers. They didn’t. It was as though I was meant by some greater plan to find what I had. It was as though by some mysterious force, I had been told by the Johnny Jump-Ups to go over there and plant purple flowers.

I placed the water and crystal down over the center, where I had discovered it all. Around this, I planted the seeds of the Johnny Jump-Ups as I had intended. Around these, I will plant 7 purple sage plants, which will also grow purple flowers. On the first day that I arrived here at Metta Earth, my family and I gifted the institute a wind chime with a metal yellow scroll that says “Namaste.” Gillian immediately decided it would be hung from one of the plum trees in the grove. I lay down for a moment in the center, listening to the wind chime’s bell, staring at the clouds through the lettering of the word “Namaste” and attuning to the grove. “The light in me bows to the light in you,” I thought to myself. I thought this to the horse. I thought it to its owners. I thought it to the children who built the labyrinth. I thought it to Gillian and Russell. I thought it to the trees. I thought, “There is something divinely special about the spot in the center of the plum grove.” I hope that all who step into the plum grove, whether to attune, to meditate, to practice, to pray or to play can witness its magic: Namaste.