We take the stairs up to the barn loft, knowing we’ll leave by the ladder. 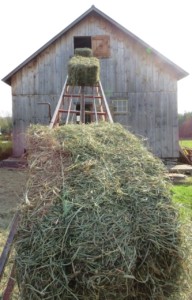 For September it’s unseasonably hot, and hotter still up here. The smell of dried garlic and last year’s hay lingers in the thick heat that has risen from downstairs and swarmed through the loft’s slatted sides and roof. We stand, hands on our hips or weight shifted to one side, surveying the space. Outside, down below, there are three hundred bales of hay piled in our neighbor’s wagon, and something here—something about all of us, together, something more alive than life—tells us they’re all going to fit.

Russell pushes open the wooden window—a slight breeze, smooth and cooling—and leans outside. All set, he calls, and with a low, mechanical grumble, the hay elevator starts to churn. We’re ready. One bale rises over the ledge of the window, eclipsing the stream of sunshine like a moon, casting its shadow over the length of the loft, and thuds, exhausted, onto the floorboards. Ben lifts and carries it, stacks it against the side. Another bale rattles up, falls through. Thud. The baling twine, tied taut by the baler as it swept through the far field, presses into my fingers, pulls me tight to the bale. For a moment it’s suspended against the length of my body—dry grass pricks, rubs against my thighs, makes its mark in a series of little scratches—and then it’s dropped against the side. More bales up, through the window, thud, thud. The air is filled with sunshine, dust motes, the acidic smell of sweat.

We build ourselves a pyramid. Its sides expand and approach the window, until the distance we’re traveling between the window and the pile has shrunk to mere footsteps. More bales. We stack under our own feet. We’re hopping, grabbing shoulders, catching our feet as they slip into the spaces between bales. As the calls below—two more, one more, all set—subside into tired cheers, we are standing in the midst of what nature has allowed us to build. Grass from the fields, dried by the sun, that will keep warm and feed our beloved animals throughout the winter to come.

I wonder, before I leave, if I were to lie down here, would I blend right in? If I were always this close to that something, would I ever really die?

This site uses Akismet to reduce spam. Learn how your comment data is processed.